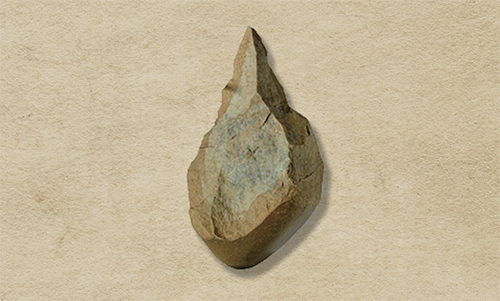 Since their settlement in prehistoric times on the land now known as the Korean Peninsula, the Korean people have developed a wealth of unique cultural traditions related to the way they dress, eat, and behave at home. These traditions reflect the natural environment of their homeland, a terrain predominately covered by hills and mountains, bound by the sea on three sides and marked by four distinct seasons.

Clothing and Fashion
The Korean people learned to use various fabrics, such as sambe (hemp), mosi (ramie), cotton and silk to make a range of clothing that was not only attractive but also provided them with effective protection even during the harshest winters and the hottest summers. They made warm winter clothes using the technique of filling soft cotton between two layers of material, silk or cotton fabric, and sewing them together with fine stitching, and produced cool summer clothes with hemp and ramie. These clothes typically feature graceful lines and forms that create the serene aura characteristic of the traditional Korean clothes we know as hanbok.

Korea’s indigenous clothing, hanbok, has maintained its basic components throughout Korea’s 5,000-year history, while its styles and forms have evolved in various ways based on the lifestyle, social conditions, and aesthetic taste of the times.

History reveals that Korean people in the past tended to prefer simple, white clothes to clothing decorated with different colors and designs. That is why they were often referred to as “the white-clad people” among their neighbors who admired them for being a peaceful people. Nonetheless, Korea has also had a long tradition of enjoying colorful clothes with complex designs depending on the period and the wearer’s social status.

Today, Korea is home to many talented fashion designers who have earned an international reputation with their creative designs which combine traditional Korean designs and patterns with a modern artistic sensibility. The beauty of traditional Korean clothes has been introduced to, and praised in, many parts of the world thanks to the remarkable success in recent years of many Korean films and TV dramas including Dae Jang Geum.

Korean people today seem to prefer clothes inspired by modern Western styles to their traditional clothes, although some people still insist on wearing the latter on traditional holidays or for special family occasions such as weddings. Their love of tradition and yearning for the new sometimes led to the creation of attractive “modernized hanbok.”

Now a household name across the world thanks to “Gangnam Style,” a K-Pop song that shook the world in 2012, Gangnam-gu in Seoul is a large district where wealthy residential areas sit alongside high-end art facilities and Korea’s busiest fashion streets. The district now attracts numerous fashion-minded tourists from across East Asia and beyond with annual fashion festivals comprising international fashion shows and contests participated in by many rising designers.

Another fashion district in Seoul that enjoys an international reputation is Dongdaemun gu, which has grown into a hub of the regional fashion industry, providing creative, affordable fashion items for youth and the young at heart. With its fully developed distribution and sales network, highly efficient production facilities, and throng of talented, aspiring designers, the district is now one of Seoul’s most popular attractions among foreign tourists.

The history of the Korean nation began in Manchuria and the Korean Peninsula when people started settling there 700,000 years ago. Representative historic sites associated with the people of the Paleolithic Age, who used tools made of animal horns and chipped stone tools, include Geomeunmoru Cave in Sangwon, Pyeongannam-do Province; Jeongok-ri in Yeoncheon, Gyeonggi-do Province; Seokjang-ri in Gongju, Chungcheongnam-do Province; and Durubong Cave in Cheongju, Chungcheongbuk-do Province. The early inhabitants of the peninsula survived by hunting for animals and collecting edible plants in groups.

In Korea, the Neolithic Age began around B.C.8,000. People started farming, cultivating cereals such as millet, and used polished stone tools. They started settling down permanently in places and formed clan societies. One of the most representative features of the Neolithic Age is combpatterned pottery, examples of which have been found all across the Korean Peninsula, including Amsa-dong, Seoul; Namgyeong, Pyeongyang; and Suga-ri, Gimhae.

Hand Axe.This multifunctional tool dates back to the Paleolithic period, it was discovered in Jeongok-ri, Yeoncheon-gun, Gyeonggi-do.

The Bronze Age started around the 10th century BC on the Korean Peninsula and the 15th century BC in Manchuria. Historic sites associated with the Bronze Age are found in Liaoning and Jilin Provinces, China and across the Korean Peninsula. With the development of the Bronze culture, a society emerged in which the head of a clan exercised great influence. The strongest clan leaders started merging many clans into one, and these groups very gradually developed into early states.

The tribes that played a central role in the establishment of Gojoseon, which emerged as the first recognizable state of the Korean people, believed in the King of Heaven and worshipped bears. The two factions jointly upheld Dangun Wanggeom as their chief priest and political leader. Gojoseon fostered an independent culture in Liaoning, China and along the Daedonggang River. By the 3rd century BC, kings such as King Bu and King Jun had become powerful and bequeathed the throne to their sons. They established a solid system of rule, backed by high-ranking retainers and military officers.

Towards the end of the 3rd century, the Qin Dynasty was replaced by the Han Dynasty in China, creating a period of social upheaval. Many people moved southward to Gojoseon. Their leader, Wiman, acceded to the throne in B.C. 194 and Gojoseon expanded its territory under his rule. By this time, Gojoseon had adopted iron culture, developed agriculture and various handicrafts, and increased its military strength. It tried to monopolize profit, while serving as an intermediate in the trade between the Korean Peninsula and China, taking advantage of its geographical proximity to China. This led to confrontation between Gojoseon and Han China. Han attacked Gojoseon with a large number of ground and naval forces. Gojoseon defiantly resisted the attack and won a great victory in the early stage of the war, but its capital at Wanggeomseong Fortress fell after a year of war, and Gojoseon collapsed in B.C. 108. 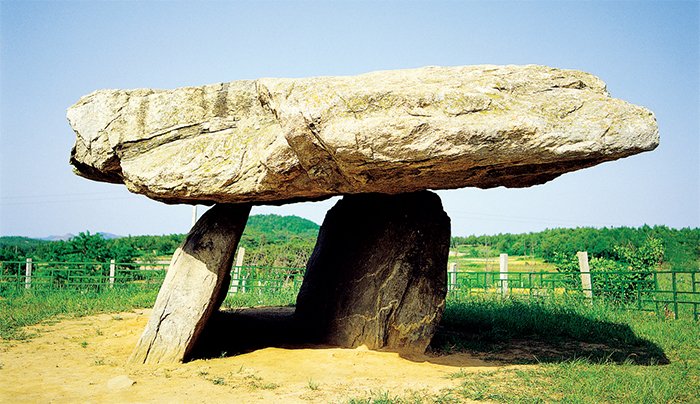 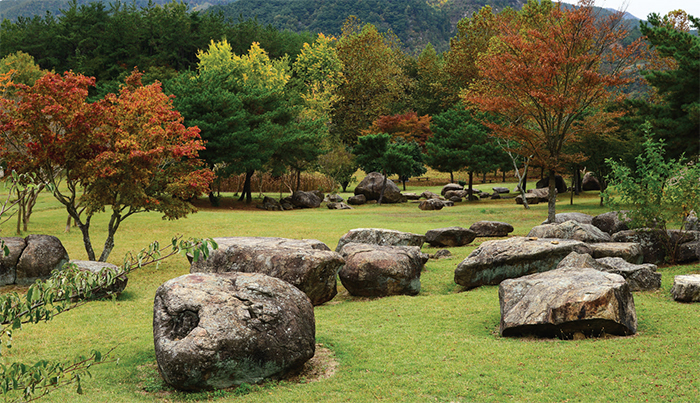 The Seven Wonders of the World include sites such as the Great Pyramid of Giza, the Great Wall of China, and Stonehenge in England among others. However, Korea’s dolmens are no less mysterious. About half of all the dolmens in the world or around 40,000 dolmens are found on the Korea Peninsula.

Diverse artifacts, including human bones, stone objects, and jade and bronze artifacts, have been unearthed from the dolmens, although how such large stones were transported and built at that time still remains a mystery.

In the past, the dolmens in Korea used to be classified into two categories: the northern type (table type), which includes the dolmens located north of the Hangang River, and the southern type (go-table type). However, after go-table dolmens were found north of the Hangang River, and tabletype dolmens were found south of the river, the northern/southern-type appellations were dropped. Meanwhile, other scholars have added new types to this system of classification.

Dolmens are often referred to as tombs, but it is difficult to make this claim with any certainty. Yi Gyu-bo, a great scholar of Goryeo in the 12th century, left the following remarks about dolmens: “People say that the saints put the dolmens there in the olden days. It is indeed a wonderful technique (that enabled men to position such huge rocks in that way).”

In the early 20th century, American missionary Horace Grant Underwood claimed that dolmens were not tombs but rather that they were put there for sacrificial rituals offered to the gods of the earth. A Korean folklorist named Son Jin-tae pointed to a folktale in which dolmens were believed to be the houses of witches (Mago halmeoni in local legends).

Former Japanese prime minister Yukio Hatoyama, well known for being a pro-Korean politician, visited Hapcheon in Gyeongsangnam-do province on Oct. 3 and apologized to the surviving Korean victims of the atomic explosions in Hiroshima 73 years ago.

The former Japanese prime minister visited a welfare center for atomic bomb victims in Hapcheon and paid tribute at a memorial altar inside the facility. He then attended a meeting with about 30 victims and said, “I would like to apologize for the damage caused by U.S. atomic bombings and Japan’s colonial rule.” He knelt and held the hands of each of the elderly victims, offering words of solace to them.

“I apologize for the Japanese government’s failure to provide sufficient support to the Korean victims of atomic bombings,” the former Japanese leader said.

About 600 of 2,000 Korean atomic bomb survivors live at the Hapcheon welfare center, which is the largest community of survivors in the country. Yukio Hatoyama is the first Japanese politician to meet with the Korean victims and offer his apology.

In 2015, Hatoyama also knelt in front of a memorial stone at the Seodaemun Prison History Hall in Seoul, expressing remorse over Japan’s wartime acts.

The Smile of Silla Roof-end tile designated as treasure